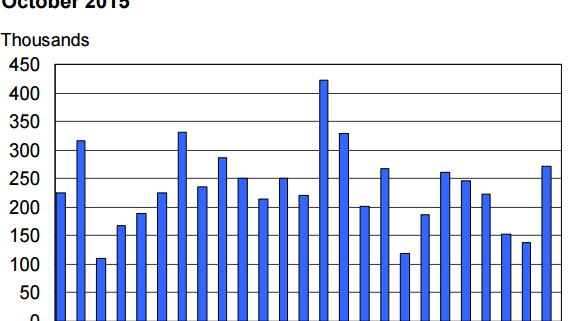 It’s been a full quarter since we last commented on the U.S. economy and jobs market this July. But today, after relatively weak job growth reports in August and September, the Bureau of Labor Statistics released their report for October. So it seems like a great time to check in with the new data on hiring and unemployment.

The Data and Analysis:

Here’s the raw data from The Bureau of Labor Statistics, but, as with many things, much of the real value here is in the interpretation.

As always, the Wall Street Journal does a great job of dicing these numbers up and providing actionable insights in the WSJ job Market Tracker, or you may prefer the easy-to-understand Washington Post graphical analysis.

The New York Times provides some of the best commentary in both their Jobs Report Summary and in this Jobs Report Review, while Forbes sums it all up nicely, and the L.A. Times had one of the best quick take articles we found.

Here are a couple of comments from us:

Although the last three jobs reports have been sensationalized a bit in the media with low numbers in August and September and now much-higher numbers in October, there’s little reason to think we’re seeing wild swings in the overall health of the economy. As Neil Irwin of the New York Times smartly points out:

Of course there is no reason to think there was a radical yo-yo effect…  …More likely the United States job market has been improving at the same relatively gradual pace the last couple of months and, frankly, all year.

…what we’ve probably just witnessed is a classic study in the challenges of making sense of the fortunes of a $17 trillion economy with 157 million workers in real time.”

Unfortunately, that simple message, that the U.S. economy continues growing at a consistent if modest pace, can get lost in the shortsightedness of the 24 hour news cycle. And with the growing focus on the 2016 presidential election cycle, this message could be overshadowed in 2016.

So, if this trend continues (as many economists predict it will) what does this mean moving forward?

2. Everyone is watching the Fed

Media coverage seems focused on how this report will influence a possible Fed interest rate hike this December (lock in your rates now). And analysts seem to be convinced that the Fed will take action and raise interest rates for the first time since it started its move to current historic low rates in 2007.

3. …But the real story is continued strength in the economy

But the fact that a Fed rate hike is looking more and more like a certainty is direct evidence that policy makers see long term strength in the U.S. economy. After nearly 70 consecutive months of U.S. job growth, October’s numbers also included renewed signs of positive wage growth, an indicator that the U.S. economy may be getting closer to ‘full employment’, or ‘normal’ unemployment levels.

4 …And the market opportunities it will provide us in 2016

Combined with a strong Canadian job growth report, we are predicting 2016 as a year of increased consumer confidence and increased spending on the kinds of services our customers provide. We think the big message for service industry companies is that their customers, both commercial and residential, could have more funds available in 2016 than in any year since at least 2007 and will have the confidence to spend them.

And this availability of funds could be just the right opportunity to take on new projects or complete upgrades that may have been deferred for years. Meaning, 2016 could be a banner year for your business… if you’re ready for it.

So… Are You Ready?

If you want to be a big winner, you’ll need to be better than your competitors. How can you achieve that? Maybe we can help…

Here’s a few tips from our archive:

And of course you should automate your quoting, sales, and operations with powerful software tools like Go iLawn and Go iPave.

If you haven’t tried them before, Click Here to start a low-cost trial and see how we can help you Measure more properties to Bid more jobs and Win more sales.

Rain? Snow? How Will You Know?
Scroll to top